Pathfinder Combat Part 2: What You Don’t Know Won’t Kill You

But, it can annoy others. I played my first round of the Pathfinder RPG last night. It was a lot of fun alongside +Jennifer Corniuk , +Jonathan Henry , and +Jeffrey Meyer  with +Mark Knights  at the helm. Mark was doing his best to get us through an adventure after finishing up character creation, which took a little longer than we expected. For example, I had apparently forgotten to save mine, so had to hurry up and make an Intelligence roll for memory and fill out a new sheet. But, he got us through some combat. There was one small piece in the beginning where my character, an honorable samurai, just cut through a peasant like a hot knife through butter for blocking his path, which didn’t really count. Mark had reminded me here, however, that I shouldn’t be adding my Strength for an offhand weapon.

Oh, whoops, sorry. I know that, why did I do that? It didn’t hit me until later that I was being stupid and did it a few times. One time, I know Mark was about to correct me, but just figured it better to move on. Why didn’t you correct me, Mark?!? Then, there were simple questions about movement. For some reason, I went with what I had learned through play and totally forgot that the book allowed for diagonal movement while prior GMs/DMs had taught me that was a big no-no. Old habits are hard to break, sheesh.

Still, we had fun, and I turned back to the book between last night and tonight.

So, I was around the part of movement and I’m here, looking at the diagonal movement rules. I have to remember to count the first diagonal square as one and the second as two, and then alternate back and forth like that. That’s going to be picked up through practice. I don’t think I’d ever remember something like that just from reading it. And, why can’t we use our allies as cover. In a bar fight, I’m just as likely to use my own friends as human shields—I can come back and avenge them later. Where’s that rule? Oh, it’s not thee, because it is tactical and not realistic combat. Gotchya. 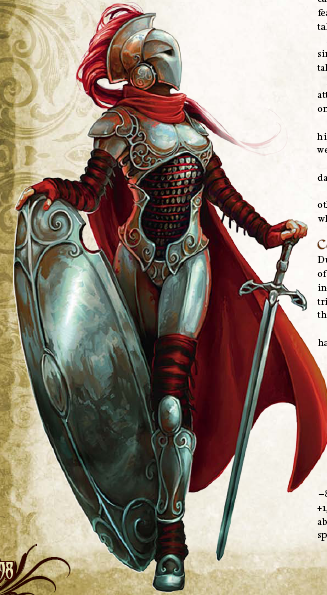 You can’t move through a square occupied by an opponent, unless you use overrun or they are either three sizes larger or smaller. This is coming back to me now. Combat and 3E and now Pathfinder is a long list of rules with a longer list of exceptions.

I’m going to take a step back real quick.

I might sound like I’m complaining, but I’m not. I may be poking a little bit of fun, but the Pathfinder RPG still seems like it’d be a really good game. However, it comes to me that part of the fun is in memorizing these rules and learning the different ways to use them to your advantage. It’s like how some people play MMORPGs and have a great time by working out new sequences of attack to achieve maximum effect. Now, that wasn’t me. When I played them I was more of a collector and banker, but we all had fun. Here, we have a lot of options and no one should learn them all right away unless they have some sort of eidetic memory, but they will over time. This is probably also colored somewhat by my reading a much thinner rules set right now as I go through the Numenera RPG core book. There, I my character can accomplish the same things as they could in Pathfinder without the math and the considerations. However, by figuring out how best to do it in Pathfinder, it isn’t just my character achieving something, it is me—the player—achieving something.

Moving right along, we come up to the discussions on cover and creature size and how it can affect combat. Then, combat modifiers including dazed, helpless, stunned, and many others are discussed. I will say that, in my experience with d20/OGL role playing games, dazed and prone have been two of the most common things I have run across. Flanking came up last night. Many of the GMs I played with considered flanking being on two sides, as long as the character’s we’re right next to one another—so, one directly to the left and one directly above or below could flank. Ha. That was way wrong and I remember having that discussion previously, but I was always overruled. So, last night, when I was reminded I had to be on a directly opposite side, it took me back for a second. It’s right, of course, but it makes me begin to wonder how long it’ll take to break all these bad habits I built up over the years.

This one, I had totally overlooked before, or maybe it didn’t even exist. Aiding another in combat is pretty cool and it makes perfect sense. I’m helping to distract or overpower the opponent, so my ally can get a bonus to attack or AC. I don’t know that I have ever seen it used. I see things like this as a bit of a drawback for new players. GMs and other players will help new players, but to go over every possible action and option with them would take too long. I mentioned cheat sheets before and I am beginning to realize how long those cheat sheets would need to be. Playing the game enough, you’ll pick up these tricks over time and kick yourself for not remembering the options sooner when it might have saved the death of an ally. And, I think you have to play it fairly regularly to begin picking these things up. I simply don’t think the system lends itself well to casual game play for that reason.

Last night was the first time I had heard about a combat maneuvers bonus and here I am reading about it today. This is basically the same as the total attack bonus from earlier versions. However, they have figured a new defensive mechanic, combat maneuvers defense, or CMD. For a game that is supposed to be streamlined, why are things being added? Then, beyond this, there are modifiers for certain maneuvers, indicating they are harder to pull off. The Disarm, for example, subtracts four from the CMB. I look over at overrun, which was an option I didn’t know I had last night when another player suggested a charge maneuver. It’s interesting, because I can make a combat maneuver roll or the opponent can avoid me. If they avoid me, no roll is needed and I pass through their square. Does that mean I don’t get to make the attack? It would seem so. But, if I do succeed, it only indicates I knocked them prone. Still no attack? And, if they avoid me, does that mean they still get an attack of opportunity? See, something that might seem simple to the veterans of the game has these sorts of questions. I personally think these sorts of things are exactly what we should ask ourselves and what the designers and writers should be sure to answer, especially in a game for rife with distinctions and exceptions.

I read over two weapon fight and realize I should’ve been taking some horrible consequences, even with my feat. No one pointed this out, though, even when I was still using the crappy Roll20 die roller (it hated me last night) and go over math with them. And, this brings up an interesting point. We may not have followed all the rules exactly as written, but we still had fun. This, sadly, leads down a whole new road of discussion of homebrew rules and how much you can change the system and if you don’t like the system because you’re using your own rules, why not play a different system, etc., etc.

Bottom line: I enjoyed my game. There are a lot of fiddly bits to the Pathfinder RPG—streamlined or not. There are a lot of things to remember and there are certainly things that will be forgotten. It almost seems designed for rules lawyers—a type of player I typically do not enjoy in my games. Still, if you can get the basics and have fun, who cares? Nobody has to be perfect. The whole point is to have fun with it and play YOUR game, not somebody elses.